skip to main | skip to sidebar

Last month Mary and I went out shopping for Charlie's birthday gifts. He was turning 4 and I found it difficult to find something for a child already inundated with matchbox cars, tractors and dump trucks, and a passed down complete Brio train set. Finally after Mary picked out her gifts of Thomas the Tank Engine Stickers and a Pooh workbook at the $1 store, we found the perfect thing: "schoolbooks" just like the big kids get to use but designed for little people. I bought My Book of Easy Mazes and My First Book of Cutting, both geared for the 3-4 year old crowd. 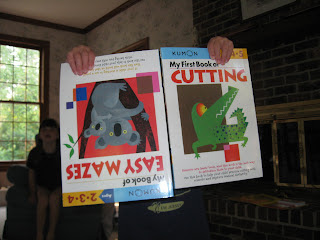 Charlie so enjoyed his gift that after unwrapping them he immediately decided to get started, plowing through 2/3 of the Mazes book by lunchtime. The cutting book was a big hit while we were waiting at the pediatrician's a few days later. Unexpectedly I found an email shortly afterwards from Kumon, asking me if they could send me some of their products in exchange for a review on the blog. I replied, "This is so coincidental..."

When the box arrived, it contained 5 workbooks and a box of letters on cards to trace with dry erase markers. The little ones have already finished 3 of their workbooks and the rest are in the box to haul up to Maine so they can "do school" while Mary works on her math. I really like that Kumon focuses on one task and is full of colorful, but not cutesy-commercial pictures. While I'm not much on structured work for the preschool set, I like these workbooks to give a child a low key, but effective learning activity.
Posted by kat at 6:10 AM

We love Kumon books around here! My oldest actually begs to do his books.

My favorite blogs and websites